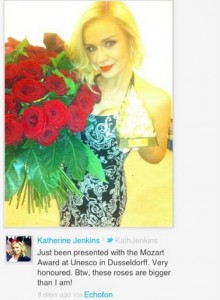 When the news spread last week that Katherine Jenkins had been given a “Mozart Award”, the sound of serious music lovers’ jaws dropping could be heard in outer space. Many simply couldn’t believe it. They thought it was a hoax. How could they give a Mozart award to Jenkins? Had she ever tackled Cherubino, Dorabella, Sesto, Idamante or Zerlina? No, of course she hadn’t. A Barry Manilow award would surely be nearer the mark.
But there on Twitter was her photo and in her hand a thing that looked like a pyramid of Ferrero Rocher.
A trawl on Google could find nothing about a UNESCO Mozart Award. It found their Mozart Medal, but the object in Jenkins’ hand looked nothing like a medal. And besides, the Medal seems to be given, in general, to very high achievers. Its past recipients include Elizabeth Schwarzkopf, the Purcell School and Mstislav Rostropovich. And while a couple of its recipients might be described as dodgy – Tikhon Khrennikov was basically a Stalin henchman and the last recipient, Mehriban Aliyeva got hers for “strengthening the intercultural dialogue” (though I don’t know what that actually means) – it is clear that the Mozart Medal is a serious award given to significant people. Surely, given the size of her PR operation, if Jenkins had been awarded the Mozart Medal we would be hearing about it from every corner of the media, let alone from UNESCO itself. But instead we were being treated to a staged photo op of her “busking” (always with the trusty microphone) at Leicester Square tube station.
Her own fans on the forum of her website, while eager to tell her how much she deserved it, also seemed bemused and asked for more information. None has been forthcoming.
Had she lied about getting the award or misunderstood and been too embarrassed to admit her mistake, hoping the blunder would just disappear? The plot thickened when emails to various offices of UNESCO could find no-one who had ever heard anything about the “Mozart Award” or could find out anything about it. All they could tell us was that you can buy reproductions of the Mozart Medal in their gift shop.
So here we had Katherine Jenkins claiming to have received an award from UNESCO when no-one at UNESCO could verify such an award exists. But then my son Adam, who can find a needle in the internet haystack, discovered that this time last year Paul Potts had announced that he had been presented the “Mozart Award” at the same gala, at the same hotel in Dusseldorf. Only he could actually spell the German city. I tweeted this new piece of information and much to my surprise, Potts tweeted me back saying that’s what he “was told it was. If wrong, not down to me. It was given to me at gala in Germany. Done gala 3 times.” (We then started a fascinating and touching exchange of tweets in which he asked me what I was working on at the moment – “always interested in the real opera world” – and we compared youthful experiences of singing Britten’s “Rejoice In The Lamb”). 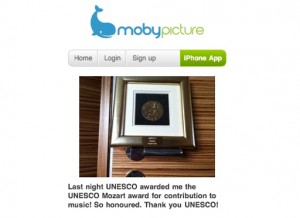 However, this raised some new questions. First, why did Potts’ award look like a medal when Jenkins’ looked like a glitzy pyramid? Second, if there really is a UNESCO Mozart Award why is no-one prepared to acknowledge its existence apart from its recipients?
I think the clue lies in the gala itself, which appears to be a mid-range celebrity bash paid for by god-knows-who.
UNESCO is a strange organisation. Simon Jenkins said so in last night’s Evening Standard:
“If ever there were a tax-free job-creation scheme for a vagrant bourgeoisie, this is it. Unesco staff cruise the world, living it up at some hapless taxpayers’ expense, handing out bouquets and brickbats like a cultural Sepp Blatter. Their judgments are without accountability.”

I think this is how it works: somebody throws a celebrity, black-tie bash and a popera singer is invited to perform (because that’s, you know, a bit posh), lured possibly by the promise of an award. Let’s not forget that award ceremonies of dubious merit, of which the Classical Brits must take top billing, are the lifeblood of the pop-classical music biz. Something is found from the UNESCO gift shop. This year it seems to be a replica of the thing they gave the actor Clive Owen, the Pyramide con Marni, for work in Rwanda. From photos I’ve seen they seem to give one to pretty-well anyone who turns up. Last year they gave Potts one of the Mozart Medal replicas in a frame. Some minion (probably a diplomat’s niece who’s just been thrown out of a Swiss finishing school and who is on 45 grand a year being a useless PA) sticks on a little plaque and the evening’s host announces to the assembled freeloaders that the evening’s entertainment is being given the Mozart Award! Everyone goes “ooh”, checks themselves in the mirror, and then they move swiftly on to present Naomi Campbell with the Ghandi Award for her work against domestic abuse. Or something like that.
Basically, it would seem to be a load of bollocks.
So, yes, Katherine Jenkins did get a Mozart Award at a Unesco gala (“in Dusseldorff”), but it holds as much weight as saying I once got awarded some crystal glasses from BP in recognition of buying ten gallons of petrol.