Skip to content
I’ve not held much truck with the way ENO has taken its marketing in the last few years. It strikes me as a combination of X-Factor-esque, panting hyperbole and glossy mag vapidity. And now the Netherlands Opera, faced with plummeting subscriptions, subsidy cuts and a desperate need for box office revenue, has decided to market one performance of Billy Budd as a “Gay Date Night”. This is picture they’re using on the publicity: 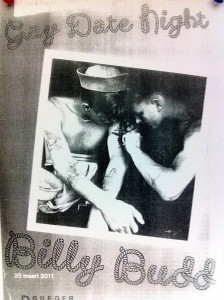 Needless to say the image has nothing to do with our production. Elsewhere on the web couples are urged to see Britten’s “gay opera” on this particular night. They are even offered massive ticket discounts.
I find this depressing on several levels.
I really thought we were beyond this now. Isn’t every night at any opera Gay Date Night? I’ve never known any environment with less prejudice than an opera house and I’m more likely to bump into gay friends at the opera than anywhere else.
If they’re going to promote Gay Date Nights are they also going to start Straight Date Nights for operas that they think will particularly appeal to randy heterosexuals? Because, let’s face it, that’s what this poster is trying to say – “Gay guys will find this sexy”.  Why stop at sexual stereotyping? Why not have, say, a Black Date Night for Otello? Asian Date Night for Madame Butterfly? What on earth would they do with Death In Venice?
Which leads me to the more important issue: the labelling of Billy Budd as a “gay opera”. I might not know as much about Britten as many, many people but I have a hunch that I know a whole heap more than the marketing twerp who thought up this one, and I am fully confident when I say that Britten would be horrified to have Billy Budd described as a “gay opera”. Of course the homo-eroticism is a massive factor in the plot but if I had to describe it in one word – and would that I didn’t – the word would be shame rather than gay, though I readily concede that “shame opera” would hardly put bums on seats. I don’t think anyone on the stage is playing this production as if they were in a “gay opera”. It’s just so much more massively complex than that.
And finally, isn’t it terribly patronising to sell an opera with the implication that “ordinary” opera isn’t as interesting to the gay community as one where some sailors might get their kit off? Where do they get THAT idea? I know many more self-professed opera queens who would rather spend an evening with Suor Angelica than the cast of From The House Of The Dead. (How many naked sailors are there in The Wizard of Oz for gawd’s sake?) Conversely, the label “gay opera” might put off a bunch of straight people who really should see Billy Budd because it’s such a wonderful opera and they might learn a thing or two. If I saw an evening being sold as Gay Date Night I don’t think I’d be alone in thinking I might not be welcome in the opera house that night if I took my wife along.
We’ll learn in a couple of weeks whether the experiment in barmy Dutch liberalism has been a success. I’m dubious, as is anyone in the cast, gay or straight, with whom I discuss it, but as a card-carrying liberal I’m prepared to eat my words if I’m wrong. It probably isn’t anything to do with liberalism though; just misguided opportunism by the marketing department. And these days, even in opera, the publicists rule the roost.