Skip to content
The funny thing about starting a blog is that you set out writing it for practically no-one. Not even a teacher who’s going to mark it out of ten. You try your darnedest, you really do, to make it erudite and witty. You bung in jokes and telling observations. You tune, you edit. You post it.
And then absolutely no-one reads it.
Well your wife does, after enough nagging, and then possibly a child or two. You post a link on Twitter but as you have only 23 followers, at least four of whom are realtors from New Mexico and astrologers from Orpington, none of them bothers to click on the link. Yet another blog. Who cares? Who has the time?
After a month or so, if you’re lucky, some friends and family will have given it a glance. Still you carry on. It becomes something of an obsession. You find yourself saying in conversation “as I wrote in my blog…”, not because you’re advertising it but because all your powers of observation are being focussed on your writing. You’ve forgotten how to have a conversation. You merely hold forth.
And still very few people read your efforts.
Then a popular popera singer says something silly. You write something about it, crack a few jokes at their expense. Suddenly your visitor counter is spinning like top. You take a swipe at a mezzo-poprano (nope, not a spelling mistake). Boom! Through the roof.
Then what? More of the same? It’s very tempting, like a modern television producer, to be lured by those viewing figures into going on and on simply feeding the beast, giving the readers what they seem to want: mouthing-off. But this blog was never meant as a place for polemic. And I’m not comfortable as a satirical journalist. I did it elsewhere a few years ago but stopped after a couple of years. To do it well, with feeling, you have to be outraged a lot of the time. It starts to affect your very soul, to strand you in a permanent view that the glass is half empty. It can make you bitter and bitchy and that’s the last thing I want to be.
So, while I have no doubt I shall be throwing punches from time to time, I hope no-one comes here looking for a regular dose of bile and venom. It’s really not my thing.
Which is why today’s post is going to be a recipe for no-knead bread.
I was told about this recipe by a friend who saw it in the New York Times, where in fact it was a bit more complicated. I’m going to make it from now on whenever I’m away from home. The photo is of a loaf I made in Chicago. Making bread is a lovely thing to do when you’re away from home, in digs. It’s creative and comforting. And this recipe doesn’t need any equipment that you shouldn’t have in decent digs. A lidded casserole is its only necessity. That’s also why I’ve used cup measurements as kitchen scales are rarely provided.For the first stage you can use your hands or a food processor. (I use, if there’s one around, a food mixer with a dough hook but you’ll be lucky to find one of those in digs!)

I’ve done this loaf and let the dough prove for only 5 hours then an hour and it has still turned out pretty well. The longer you leave it the better the texture will be.
It makes great toast, especially several days after you’ve baked it. If there’s any left. 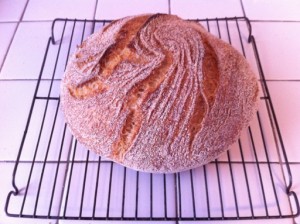